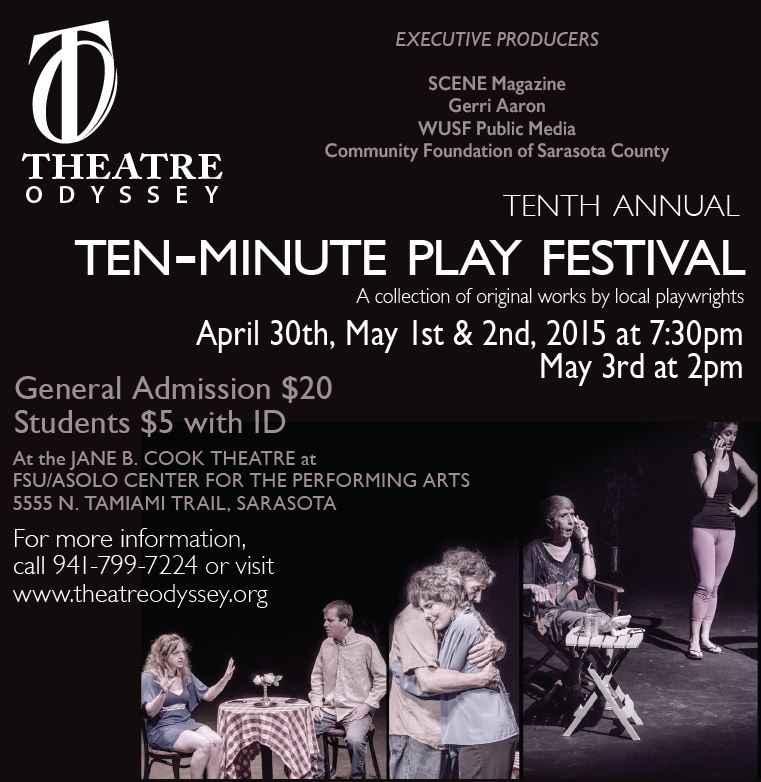 Theatre Odyssey’s tenth annual festival line-up of plays is almost an even divide between comedy and drama. “It is always impressive to me that these talented writers are able to tell a complete story so effectively in ten minutes, whether it is comic or serious,” said Theatre Odyssey Board President Tom Aposporos.
To purchase tickets online click here or, call 941-799-7224 to purchase tickets by phone.
The festival runs April 30, May 1 and 2 at 7:30 p.m. and May 3 at 2 p.m. at the Jane B. Cook Theatre, FSU/Asolo Center for the Performing Arts.
Here is a list of plays, with one-sentence descriptions from their authors:
DREAM ON, MERRY MAY by Bernard Yanelli
“A fabricated story about a big band singing career leads to both sorrow and joy for a family in transition.”
NIMBY by Robert Kinast
“The president of a downtown business alliance opposes the location of a shelter for the homeless but begins to rethink her position when she encounters a homeless person who turns out to be an old friend from college.”
WHY by Marvin Albert
“This is the story of an adopted woman who seeks out and confronts her birth mother.”
IT’S TIME TO MOVE by Ron Pantello
“A set of twins (boy and girl) in the womb arguing about moving into the real world.”
THE LOCKET by Mark Leib
“Four adult members of a family search for a mysterious locket containing the photograph of their deceased Aunt’s long, always-hidden love.”
HIGH SCHOOL REUNION by Arthur Keyser
“A 101 year-old gentleman carries on his high school class tradition of an annual reunion in the belief that he is the last survivor until he discovers there is another classmate still alive.”
THE COWARD by Dylan Jones
“A mysterious man tries to convince a frightened American soldier that there are fates far worse than death.”
THE DANCING LESSONS by Connie Schindewolf
“Catherine visits her mother, who has Alzheimer’s, and tries desperately to get her to communicate; but Miriam’s memory continues dancing around in the past.”
The winning play from the Student Ten-Minute Playwriting Festival, AS LONG AS THE MOON SHINES, a poignant story of family, by Julien Freij, will also be presented at each performance.
In addition, for the first time in Theatre Odyssey’s history, a sign language interpreter will be present at a festival performance. Meredith Worthley is donating her services on Opening Night, April 30, and, “we are grateful to her for enabling us to allow these plays to be appreciated by those who are deaf or hard of hearing,” said Aposporos.
We thank the Executive Producers for this tenth annual festival, Gerri Aaron, the Community Foundation of Sarasota County, SCENE Magazine, WUSF Public Media; and Producers, the Freij Family.

This site uses Akismet to reduce spam. Learn how your comment data is processed.